Arriving in Lefkas on the 4th August with first mate Lisa Cain we meet up with owners Roger and Dianne Perry who welcomed us with a very good lunch a sign of things to come for the great food we had along the whole delivery despite some challenging cooking conditions.
Going over the boat the first day making my normal checks I was very impressed with the condition of her. Everything was well maintained and labeled, I was also given a lamented inventory and location of skin fittings etc. All this meant that minus very few little fixes we could plan to leave on the morning of the 6th which gave us a very good force five for two days towards Messina, setting a four on four off watch system with dog watch. We left through the Lefkas canal and into the Ionian.
After a great couple of days full sailing we made it as planned in the morning to pass trough Messina which can be very busy if passing through at night. On watch just as the sun was coming up we were treated to the view of the ever erupting Mount Enta and on the Italian side what looked to be a smaller eruption lighting up the coastline what with the presences of dolphins during the whole morning it was a good time to be on the morning watch.
Through Messina we headed for our first fuel stop in Cagliari, Sardinia unfortunately the wind died and it was on with the motor. Although in a great position for us Cagliari didn’t have much to offer and all of us were keen to carry on so we stopped to rest for the evening fuel up and leave for Gibraltar the next stop.
First day out the wind is light and west which meant we had to play the game trying to sail whenever possible to save on fuel as we would have to make another stop if we kept on with that fuel consumption. Not much changed so I made the decision to save on fuel and sail up to Ibiza for a splash and dash stop, we couldn’t have been more than a half hour very impressed with everyone’s keenness to carry on. As you might guess as soon as we get out the wind changes and we had a great sail going into night watches. Even better as I got up for the 8am till 12 shift I found Roger and Dianne with the cruising shoot up making 7-8 knots! 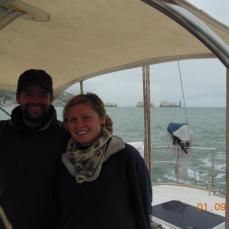 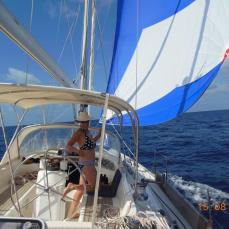 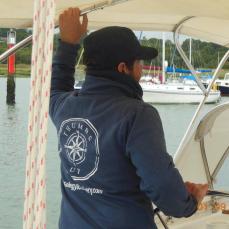 Tracking down the Spanish coast to Gib we had the normal fishing and tanker traffic which was made more of a worry as shore support with their daily weather updates had told us of heavy fog towards Gib which also made it harder for shore to find us a place in queens way but with some quick talking they managed it for us as always. So inshore we headed far enough of to avoid lobster pots and close enough in to miss most big traffic, reduce speed on radar watch for around 36 hours. That morning the fog cleared and as it did we saw the container ships waiting to be refuelled outside Gibraltar quite a sight to suddenly appear on your bow.
Gibraltar we had a day of rest and picked up another crew member to help out with the leg up to A Corunna which was always going to be against the prevailing conditions. After three days of beating into wind we lost our windex and VHF aerial so we made a stop in Cascais for repairs and to checkout a small leak that had continued to annoy. Entering just as a festival was starting with live music a nice welcome for us.
We got off again as soon as we could waiting a night for the weather to work for us the next leg we resolved to sail as and when we could going inland to start. During this time one of two large low pressure system had just passed which gave us a very uncomfortable swell coming from the west which died off soon enough as expected. As we made it to Cape Finnster fog again so we headed for the ITZ to be safe.

During that night we had clouds of phosphorescence in the water followed by tubes of light breaking up like a cloud, this turned out to be shoals of fish being hunted by dolphins. Something I have not seen before and very hard to explain, it was something close to a pink Floyd light show on the water or a storm in the sky.

Short stop in A Corunna with good forecasts in hand we watched the second low pressure system move across and up towards Brest the plan being to follow the end of it up in a good force four/five which worked as I thought and even had a chance to dust of the cruise and shoot mid Biscay. From their we hit the ITZ at Brest in the evening expecting to be busy on the outside as planned. Having passed through some ruff over falls we headed to the English Channel and maybe the two best days sailing we had. Heading straight across towards Dartmouth until the tide started east then we made our change and had a very favourable tide and wind. All going well saw us into the needles on the second flow we made a great nine knots straight down into hamble and Swanick fuelled up and a well deserved beer brought for us by Roger.
As we set about cleaning down and putting the boat to rest we found that during the whole delivery Alchemy had been kept so clean that we only had an afternoons cleaning to do.
A big thank you to Roger and Diane it was such a pleasure to sail with you both on such a well kept yacht. Also the crew, Lisa the first mate made it a very enjoyable trip.

A big thank you to Thumbs Up

Diane and I commissioned Thumbs Up to help us with an \"owner assist\" passage, to bring, Alchemy, our Moody 42, from Lefkas, Greece, back to the Solent. The skipper, Doug, was just what we had hoped for. He instilled great confidence with his quiet efficient management of the passage. He and Lisa, the other crew member provided for the trip by Thumbs Up,were great to have aboard. It was obvious that Doug\'s wealth of sailing experience meant that we and Alchemy were in good hands, which resulted in a passage that caused much less anxiety for us, than we had expected.