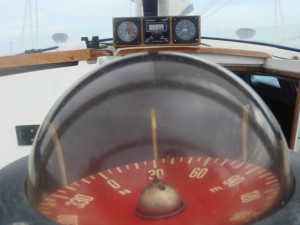 The proud new owners are the Sinclair Brothers, Ian and Stuart. Being very happy with their new purchase they decided to get Thumbs Up to deliver her to North Fambridge in Essex. Another delivery to Fambridge! I couldn’t believe it, after the 40knot winds we had in the Estuary on ‘Hullabaloo’ I did see the passage with a touch of trepidation. However, having done it once, I was more than confident we could do it again!

We arrived to Lidcombe Boatyard, got the dinghy in the water and loaded our gear in. Quite a lot in the end, this time there was 4 of us! (Anthony Andrew as 1st mate, Donal and Jenny as crew, and me as delivery skipper)
The outboard, after spluttering hopefully once, refused to start up. The yard couldn’t remember exactly where she was tied up and so it was a bit of an exploration around the river to find her. Luckily the tide was helping us along, so the heavily laden dinghy wasn’t too much work to row to Blue Octopus.

When we got on board there were a couple of surprises. The main being, there were only two teaspoons and a couple of mugs on ‘crockery and cutlery front’. The autopilot also seemed to be missing the drive belt, so hand steering all the way it would be!
Donal and Jenny managed to get ashore and convince a fish and chip shop to give us some skillets and plastic cutlery. So at least we could eat!

We departed at 10pm into the night to the sound of what seemed every pub in Salcombe in rapturous Sing-A-long. The temptation to turn back and tie up to the buoy was NEARLY too much. Luckily, the Atlantic swell and darkness quickly put us in delivery mode. Sails up, Lets GO!

Lovely down wind sailing ensued. Off of Ventnor on the Isle of Wight the breeze died late afternoon. Time for the engine!
Aaannnnd…… it doesn’t want to start! Try and try. A complete no go. I gave Stuart a call to report we’d be sailing in towards Cowes to tie up on a mooring buoy and call out an Engineer. Disappointed but understanding, he said no problem.
“Okay, so before we go in… lets try one more time” Amazingly, this time Jenny’s magic touch  got it started!!
“Okay, if we turn it off and it starts again, we’ll continue on..”

And sure enough, started first time!

And so onwards, motoring into the night.Donal and Jenny got me up, a little concerned by some nearby ships. I popped up, nothing to be too concerned about I thought. “Just keep an eye on them for now…” About 5 mins later, they called again… “One of them has turned right in towards us now!”
It was a large commercial fishing boat, pretty infamous for their unpredictability and general distaste for ‘yachties’.
“Hard to Starboard!” I shouted.
Although fairly close, they had previously been going totally the other direction. Whether they’d happened on a shoal of fish that happened to be exactly where we were I’m not sure. But nonetheless, they certainly weren’t hanging around or taking much notice of us! Except for the fishing boat incident it was a beautiful night, the meteor shower and clear sky gave us an incredible display to keep weary eyes occupied and tired minds entertained.

The following morning, the breeze came up again off of Dungeness Point. “Righto, engine off…” As I throttled back and put the engine into neutral, it suddenly started revving up, completely of its own accord. “THAT’S NOT NORMAL!”
When the revs subsided I quickly turned it off. Something weird was definitely going on with this engine.The idle adjuster nut has possibly slipped I thought, after playing with it for a while, the engine seemed a touch more normal, but definitely acting up!
Nonetheless, it started, and gave us forward propulsion without too much problem. So we thought we may as well push on,we were getting quite close now. All that was left was to pass Dover, Goodwin Sands and then into the Thames Estuary for the final leg.
Afterall, the forecast was for pretty decent wind, so hopefully we’d be sailing most of the way!

After a good sail past Dover, gybing round the Goodwin Sands and then a beam reach to Fisherman’s Gat. Night had fallen, high tide had just passed and so we decided to come up into the breeze and sail over the sand banks between us and the River Crouch. (Last time I decided to go the long way round as ‘Hullabaloo’ had a deep draught)
I saw by my handheld GPS that we weren’t quite going to cross over the deepest section of the sandbank so I thought “Lets quickly chuck a tack in, and then we’ll have more room for maneuvering”. So we tacked over, I couldn’t believe it… with the tide now beginning to rip out of the estuary, our tacking angle was almost 160 degrees. We were almost going exactly back the way came from! With a bit of trimming and a lot of concentrating on the helm I managed to improve on it a bit, BUT NOT MUCH! Okay time to put the ‘donk’ (Engine) on and motor up tide to a suitable position. “ITS NOT STARTING!!!!!” I couldn’t believe it, if there was a time we needed it, this what is it!
My real concern was, the longer we took before crossing the sandbank, the more the tide was going out! Time to commit! Forget the engine, we’re going to have to sail all the way now!

So we went for it. Donal had a torch on the depth guage and was calling out the depths. It dropped steadily. 10metres…… 9 metres…. 8 metres…. and then quicker!    5metres. 2 metres…

By this stage we were committed, we had all the sails up, were half way across with very shallow water either side of us.
1.8! 1.7!
But thats where it stopped going down, it started rising again and I started breathing again!

Now it was time for the tricky sail and navigation up the Crouch. Me and Anthony began tacking up into it against the tide at 10.30pm.
Tack after Tack after Tack. Every five or so minutes. Again and Again.
Desperately trying to make some headway, some progress up the river. And we did, but slowly.
As the hours hours and the tide flowed past, a dim light began show behind us. “What’s the time!?….. 4.30am!”
It had hardly flown by, but we certainly were kept busy.
By now we could make out the banks of the river and so the decision of when to tack was slightly less stressful.

Finally, we had Burnham on Crouch in our sites, we tacked through moored up yachts in a light breeze. Fatigue really starting to kick.
When all of a sudden.. NO WIND.
There was 2 knots of tide flowing back up the river by this stage, meaning we were just floating, with no engine, no steerage. I quickly looked around as to what our options were, but to be honest. If you can’t steer, its more of a damage calculation than limitation exercise!

A slight puff gave me enough steerage to get around one yacht. There was a RIB behind it, so I wasn’t too fussed about bumping into that… WHICH WE DID.
Anyway, rather fortunately this spun us around into tide with the zephyr of a breeze behind us.
We quickly got the main in, and with Genoa sheet in one hand and helm in the other. I managed to ferry glide us towards a mooring buoy. It was time to tie up, this was getting too risky!
I called up jokingly to Anthony as we approached (He was preparing a lasso in order to tie us up)  “You better get this f—ing mooring buoy!”
At the last moment, a puff of wind carried us too far forward…. “Furl the Genny!”
The buoy was right next to me, but Anthony was up on the bow. “……Too late…”
There was nothing for it but to try again, the last attempt was so close. This time though, it worked to perfection!!!
We tied up, high fives and Thumbs Up all over the show!

Fatigue was taking over, we had tacked over 70 times between 10.30 and our arrival at 6.30. But if we slept now, I was sure we wouldn’t wake for another 14 hours. So nothing for it but to start the tidy and clean up.
Keep up the momentum, thats the attitude at Thumbs Up Sailing Yacht Delivery.
A few hours later Blue Octopus was spotless and we were on our way home!

Thumbs Up to my Crew…. Anthony, Donal and Jenny! Excellent work guys, you really got into the spirit of Thumbs Up!

We can't thank you enough!

“I would like to say thank you to Matt and his crew for safely delivering Blue Octopus to Essex. Despite engine problems they completed the delivery on time. I would highly recommend Matt and his crew to anyone who needs a yacht delivery. After some dealings with other delivery companies it was refreshing to talk to someone who was available at short notice and got on with the task set even though there were a few minor issues to solve before the voyage. Blue Octopus is now safely moored at North Fambridge with the engine issue diagnosed and part sent away for repair. The boat was left clean and tidy after the voyage. Matt we can’t thank you enough!”

Response: Not a problem Ian! It was an absolute pleasure, I wish you many great days sailing aboard Blue Octopus!

One thought on “Thumbs Up Yacht Delivery – Salcombe to Fambridge”